Me do Improv? Impossible! 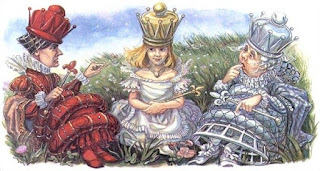 “Alice laughed. 'There's no use trying,' she said. 'One can't believe impossible things.'

I daresay you haven't had much practice,' said the Queen. 'When I was your age, I always did it for half-an-hour a day. Why, sometimes I've believed as many as six impossible things before breakfast. There goes the shawl again!”

― Lewis Carroll
When I ask people if they are interested in an improv workshop, I can't tell you how many reply with, "Oh, that's impossible. I could never stand up in front of somebody and do that!" They say they aren't funny, or they're an introvert, or they aren't creative. There's never a lack of excuses why they can't improvise. Pretty much almost all the excuses boil down to one basic root cause, fear. People are afraid of failure, of looking foolish, of what other's might think. We can always think of reasons not to do that which scares us. For a change, lets focus on the reasons one should take an improv workshop? To do that, let's look at what it takes to get hired at Google.
Google looks for those who have the ability to process on the fly. If you want to be part of an innovative company, you had better learn to innovate. Relying on status quo doesn't cut it. Google also looks for candidates who have a willingness to relinquish power. Top down hierarchy doesn't work in most places anymore. If you can't work on a team or cohort, you will be left out. This goes along with their desire to find employees who are at ease with creating space for other to contribute. Don't hog the glory, share it. You get better results when everyone succeeds, not just the team leader. Lastly, Google is looking for those who can learn from failure. If you don't risk, you can't fail. But on the other hand, if you don't risk, you can't do great things. Playing it safe is not a formula for success.
One of my acting coaches always said, "do the thing that scares you the most." In improv that is called following the fear. By attempting the impossible, we find our strength and determination. If we can succeed at something as small as standing in front of a group of our friends and making fools of ourselves, we learn that we can take even bigger risks. We can go for the job, or work on the relationship, or share our weird ideas with our supervisor. The White Queen was right, all it takes is practice. Why not practice in the safest space we can find, among other friends who want to practice the impossible. I found that my improv workshop became a family. We cared for each other and cheered one another on. If you can't be real with family, then with whom can you be real?

Changing Your Personality: An Atlantic writer pursues happiness in Improv

Olga Khazan  The March issue of The Atlantic is their happiness issue. In it the magazine promotes it’s “In Pursuit of Happiness” event in May as well as having articles on finding satisfaction, maintaining friends, and how to become less unpleasant. The article on becoming less unpleasant by Olga Khazan is entitled, “My Personality Transplant.” In it, the author says that she never really liked her personality, and other people didn’t like it, either. She described taking an online personality test of the five major personality traits that pretty much supported what she already knew about herself. She is highly introverted, scores high on conscientiousness, average on agreeableness, and extremely high on neuroticism. Individuals with high scores for neuroticism are more likely than average to be moody and to experience such feelings as anxiety, worry, fear, anger, frustration, envy, jealousy, guilt, depressed mood, and loneliness. Khazan embarked on a plan to see if she could, inde
Read more