Showing posts from February, 2022
Show all

How Many Improv Rules Are There? 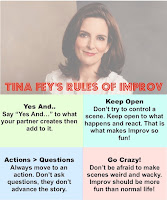 At a recent theater workshop I attended, the instructor told the class, “There are only three rules to improv, and don’t let anyone tell you otherwise. He said they are: Yes And, make your partner look good, and say the first thing that comes to mind. As an improv coach, I was taken aback. What about the rule of “Don’t ask questions, make statements?” How about the rule, “work to the top of your intelligence?” Then there is the rule to “Follow the follower?”   It made me curious. Just how many improv rules are there? I started going through all my improv books and compiled lists of rules and tips. I Googled improv rules and Google came up with The Five Rules of Improv, the Six Rules of Improv, The Seven Rules of Improv, all the way up to the Ten Rules of Improv. So who determines these rules? Who are the experts? The Upright Citizens Brigade Comedy Improvisation Manual does not give a definitive list. It does, however, provide building blocks for improv. They start with Yes And, move
1 comment
Read more

Changing Your Personality: An Atlantic writer pursues happiness in Improv

Olga Khazan  The March issue of The Atlantic is their happiness issue. In it the magazine promotes it’s “In Pursuit of Happiness” event in May as well as having articles on finding satisfaction, maintaining friends, and how to become less unpleasant. The article on becoming less unpleasant by Olga Khazan is entitled, “My Personality Transplant.” In it, the author says that she never really liked her personality, and other people didn’t like it, either. She described taking an online personality test of the five major personality traits that pretty much supported what she already knew about herself. She is highly introverted, scores high on conscientiousness, average on agreeableness, and extremely high on neuroticism. Individuals with high scores for neuroticism are more likely than average to be moody and to experience such feelings as anxiety, worry, fear, anger, frustration, envy, jealousy, guilt, depressed mood, and loneliness. Khazan embarked on a plan to see if she could, inde
Post a Comment
Read more

The Emptied Christ of Philippians, a review.

“Let the same mind be in you that was in Christ Jesus, who, though he was in the form of God, did not regard equality with God as something to be exploited, but emptied himself, taking the form of a slave” (Phil 2:5-7) The caption of the forward to The Emptied Christ of Philippians, Mahayana Meditations  by John P. Keenan clearly lays out what this book is about, “Divine Self-emptying: A Buddhist Lens on Christian Scripture and Doctrine.” In the preface Keenan tells us this is a study of Paul’s letter to the Philippians using Mahayana Buddhism as his hermeneutic guide “in lieu of the primarily Greek philosophies that shaped Christian understanding in the past.” The Emptied Christ of Philippians is a deep exegetical study of Paul’s letter seen through the eyes of Buddhist philosophy. Keenan compares the Orthodox teaching of kenosis with the Buddhist teaching of sunyata. Kenosis is about Christ becoming flesh in the personhood of Jesus. Orthodox teaching deals with the attributes o
Post a Comment
Read more

Breaking Through the Covid Cloud

It really doesn't take all that long to fall into a new habit. Trying something new the first time seems unique and odd. The second time it gets a little easier. By the fourth or fifth time you start to get into the routine. I've read that it only takes seven repetitions for a new action to become a habit. So if you want to get into the habit of a daily walk, it only takes a week.  In about six weeks from this writing, we will have the second anniversary of Covid shutdown. I remember it was on March 12, 2020 that our local theaters and churches closed. That means we've had ninety-eight weeks to develop lots of new habits. We got into the habit of meeting on Zoom. Some got into the cooking habit, particularly bread. Sourdough seemed to be a huge hit during the shutdown. I dabbled in bread but my cooking habit led me to make a batch of cookies every week for the first year.  For a time there we got into the habit of Happy Hour. Each day around 4:00 I would try a new cocktail
Post a Comment
Read more
More posts